The Geneva Bible: 1560 Edition, hardcover The Bible of the Protestant Reformation - Case of 8 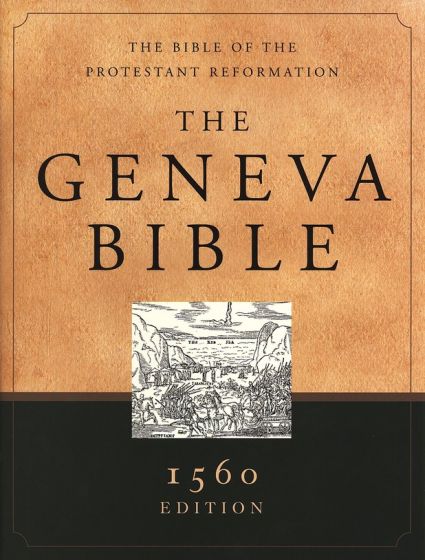 The Bible of the Protestant Reformation

Sixteenth century English Protestant scholars were determined to make the scriptures understandable to common people, so that, as William Tyndale famously put it, "the boy that driveth the plough should know more of the scriptures" than the educated man.

However, Queen Mary's (1553-1558) persecution of her Protestant subjects caused many to flee to the continent to avoid imprisonment or execution. Geneva, Switzerland soon became a center for Protestant biblical scholarship. It was there that a group of the movement's leading lights gathered to undertake a fresh translation of the scriptures into English, beginning in 1556.

Published in 1560, the Geneva Bible's popularity kept it in print until 1644--long after the advent of the Authorized Version (a.k.a. King James Version). It was an English Bible that met the needs of both clergy and laity. Perhaps the Geneva Bible's greatest contribution was its commentary, which under girded the emerging practice of sermonizing and helped foster scripture literacy. The Geneva Bible was the first to feature many innovations in the field of Bible publishing:
• Text printed in readable roman type; 7 pt. type
• Smyth sewn
• Division of the text into numbered verses
• Italic type used for words not in the original languages
• Marks placed over the accented syllables to aid in pronouncing proper names
• Extensive textual and explanatory commentary placed in the margins
• Words/phrases displayed at the heads of pages to promote scripture memorization
• Maps and woodcuts illustrating biblical scenes included
• Sold in a variety of sizes so many people could afford a household Bible

The Geneva Bible accompanied English settlers voyaging to the new world. It is probable that the Geneva Bible came to America in 1607 and was used in the Jamestown colony. Thirteen years later the Pilgrims brought it with them on the Mayflower's perilous voyage to religious freedom. The Geneva Bible stands as a landmark in the history of English Bible translation. Hendrickson's facsimile reproduces one of the finest existing copies of the 1560 Geneva Bible. Using quality materials and crafted to last, Bible collectors and anyone interested in the history of the English Bible will treasure this volume.